Posted on September 22, 2012 by JustMEinT Musings 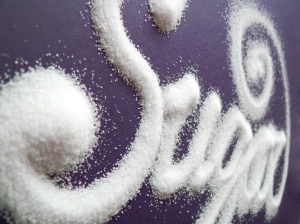 Well, well, well, who would have believed that the government would finally begin worrying about our sugar intake – as a risk factor for weight gain and life threatening illness?

After all for how many decades have they been pushing the ‘fat is bad for you’ mantra which has indoctrinated generations of people into believing natural substances like butter, cream, lard and coconut oil were clogging arteries and bringing on early death! One must wonder if things are changing for political reasons, because scientifically they have known for eons that sugar intake in more than limited amounts caused health problems. Wonder if it has anything to do with the blow out in health care costs?

Obesity is rampant – there is no other way to say it.

Watch what Dr. Lustighas to say about obesity. Very educational!

The Los Angeles Times tells us:

As public health leaders step up their efforts to temper Americans’ thirst for sugar-sweetened beverages, a new set of published studies has found that removing sugary drinks from kids’ diets slows weight gain in heavy teens and reduces the odds that normal-weight children will become obese.

Though sodas, sports drinks, blended coffees and other high-calorie beverages have long been assumed to play a leading role in the nation’s obesity crisis, these studies are the first to show that consumption of sugary drinks is a direct cause of weight gain, experts said.

New York City is gearing up to implement a ban on super sized sugary drinks.

The vote, which takes effect in six months, bans restaurants, theaters and stadiums in the city’s five boroughs from selling sugary colas that are larger than 16 ounces. It does not cover alcohol, which is regulated by the state, or diet drinks.

I am thrilled to see a modicum of common sense appearing in the brain waves of some politicians and bureaucrats – but it seems to have hit a stumbling block – the moment it raised its pretty little thinking cap. You see immediately the word hit the news stands that sugar contributed to the obesity epidemic, I heard a huge sigh of relief coming from those who espouse diet drinks and soda’s —- that does not concern or refer to us because we don’t drink sugary substances!

BIG DEAL, you don’t consume sugar as in sweetened drinks made with sugar, fructose or High Fructose Corn Syrup etc…… And you think that lets you firmly off the hook right? WRONG!

It has also been known for years that if you are among those calorie-conscious consumers who opt for diet sodas or other diet products, you may actually ruin your health and become fat, according to several new studies.

During an interview, ABC News’ medical contributor Dr. Marie Savard stated that “there is something about diet foods that changes your metabolic limit, your brain chemistry.” Savard said another recent study, which included more than 18,000 people, found healthy adults who consumed one diet drink a day could increase their risk of health problems and metabolic disorders by a whooping 30 to 40 percent.

The Purdue study showed there is a direct connection between the taste of food and calorie consumption. The rats whose diets contained artificial sweeteners appeared to overeat and become fat more quickly.

“The taste buds taste sweet, but there’s no calorie load that comes with it. There’s a mismatch here. It seems it changes your brain chemistry in some way,” Savard said. “Anything you put in your mouth, your body has a strong reaction to it. It’s much more than counting calories. It seems normally with sweet foods that we rev up our metabolism.”

So Sugar is bad for you, as are the multiple chemicals produced to trick your taste buds into thinking you are eating or drinking a sweetened substance, so why is the government only attacking the sugar industry here? We have scientific proof that artificial sweeteners damage the human body.

Why Sweeteners Make You Fat
A major American controlled study on 80,000 women showed that those who regularly use artificial sweeteners put on more weight per year than those who do not use them. What is even more surprising is the finding that, with the widespread use of sweeteners, the consumption of ordinary sugar and sugary foods has increased, too. In other words, the more artificial sweeteners you consume, the more food urges you have, thereby fulfilling their patent as an “appetite enhancement”.

There is overwhelming proof that these food poisons are making us fat. Research conducted at Purdue University shows that a group of test subjects fed artificial sweeteners subsequently consumed three times the calories of those given regular sugar. According to the study, it is far less fattening to eat sugar than artificial sweeteners, although eating this much regular sugar isn’t good for anyone either.

Most mainstream doctors recommend that their overweight patients consume diet soda, Sweet-N-Low, etc. for weight loss, but in actual fact their advice causes the patients to crave calories and binge on unhealthy carbohydrates. The obesity epidemic is spreading like wildfire ever since diet foods and beverages gained popularity.

According to Natural News (dot) Com, artificial sweetener disease ASD is sweeping the planet! Symptoms may include (but are not limited to) recurring headaches, unbearable migraines, depression, anxiety, muscle pain, arthritis flare ups, buzzing or ringing in the ears, chronic fatigue, fibromyalgia, irritable bowel syndrome (IBS), Crohn’s disease, inflammation, even acid reflux. I would add to that obesity! Read the article it will enlighten you.

So while the government is now going to attack sugar in all forms as the evil baddie, (expect a specific sugar tax soon) why are they ignoring the other evil one waiting in the wings?  There is a history behind the artificial sweetener you would know as Aspartame which is well worth reading – as always this is a case of follow the dollar, right back to those who have influence.

But why are they (those in power) totally ignoring the damage done by artificial sweeteners? Is it possible they want to keep a steady stream of sick patients on the books to insure a continual supply of victims to push pills and potions onto? Well that is a conspiracy theory for sure, and I so wanted to keep this one factual.

For now I ask you to do some homework of your own. Perhaps follow the links in today’s blog and learn what you can to decrease the world-wide obesity and sickness epidemic without any doctor prescribed medications. Sounds like a good idea to me! And don’t forget will you that sugar in all forms and types is hidden in the food supply – not only in a bottle of Soft Drink or a Latte. Home Cooking as always beats processed foods hands down for nourishment, flavour and health benefits.