Squashed Flat and Irradiated for no good reason ~~~

Posted on February 10, 2012 by JustMEinT Musings

Obviously some women enjoy pain, otherwise why would they allow themselves to be subjected to an annual mammography scan?

Time after time we have been advised that this type of screening is of no health benefit to us, and yet because the government lackeys advertise it as a benefit to detect early breast cancer, we go forward blindly and allow ourselves to be subjected to it.

They tell us the radiation risk is low.

They tell us early detection will save lives.

They fail to tell us that reputable organizations say quite the opposite!

Now don’t get me wrong I know of several women who had early breast cancer detected, had the mastectomy and are living full and fruitful lives today. Two are particularly close friends of mine.

I know of others who were told something suspicious showed up on the scan. They underwent further stress filled tests and were told they were OK, nothing to be concerned about – go home! Trust me, that in and of itself is very stressful.

Have you seen the following information on your television screens or in your women’s magazines lately?

Based on a systematic review of the latest evidence in breast cancer screening, the Canadian Task Force on Preventative Health Care have determined that the harms associated with routine mammography far outweigh the benefits.

Evidence published in the CMAJ does not support mammography screening and indicates that screening is not only ineffective it is harmful because of the false-positive tests, overdiagnosis and overtreatment. The authors stated “there was no evidence that screening with mammography reduces the risk of all-cause mortality”.

Over treatment includes aggressive mastectomy and other life-shortening interventions. In a review of statistical data among countries with organized breast cancer screening programs, it was found that the risk of breast cancer actually increases by one-third as a consequence of a 50% rate of over diagnosis.

By now you are probably asking yourself how they heck a woman is supposed to know if she has breast cancer, if mammography is not the savior it has always promised it would be? And if the government is not saying anything negative about this procedure what is a woman to do? 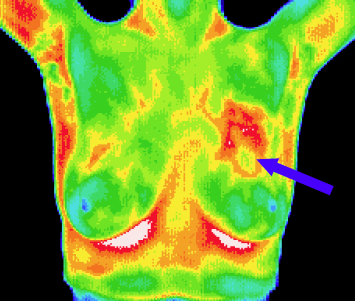 If the harms outweigh the benefits are there any options? Well as a matter of fact there are. In Australia the government is ignoring Thermal Imaging, because it says there is no evidence it will be of benefit.

The Australian Competition and Consumer Commission, Cancer Council Australia and the Therapeutic Goods Administration (TGA) are urging Australian women not to rely on unproven commercial breast imaging technologies to detect breast cancer. Diagnosis of breast cancer occurs through mammographic screening of women with no symptoms or following checks of women who have symptoms.

Ohhhh I detect a bit of competition here. It is a serious decision as to how one should perform breast screening, and a woman should have freedom of choice in the manner she chooses to employ. But this becomes very difficult when a government agency comes out against a competitive method.

“The ACCC understands the only evidence-based screening technology for breast cancer is mammography, as used by the BreastScreen Australia Program.

What is Breast Thermography?
Breast thermography is a non invasive test of physiology. It is a valuable procedure for alerting your doctor to changes that can indicate early stage breast disease.

The benefit of breast thermography is that it offers the opportunity of earlier detection of breast disease than has been possible through breast self examination, doctor examination or mammography alone.

Isn’t it time that information about the negative side of mammography was given equal ‘air time’ in the media? The Government holds the BreastScreen Australia Program tight in its grip. It has come out openly against thermography – which is far less invasive and dangerous, and can detect early cancers. What are they afraid of – a little competition? A lot less radiation?

One has to wonder if they are simply unwilling to spend money – after all the Australian Health Care system is broke and in serious decline and not only in Tasmania.

Once upon a time hand washing was laughed at by medical practitioners, can you imagine them not washing hands in the hospitals now? Right now they are laughing at thermography…… time will tell and until then, it is up to you to make informed choices – accumulative radiation and far too many false positives, or non invasive thermography?

2 Responses to Squashed Flat and Irradiated for no good reason ~~~