Vitamin B-6 May Affect Risk of Heart Disease 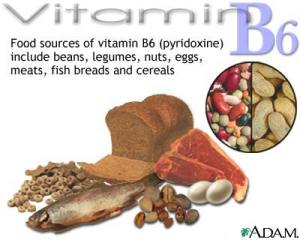 Low levels of vitamin B-6 may increase the risk of inflammation and metabolic conditions—and subsequently, cardiovascular disease risk—according to a new study.

A cross-sectional study with 1,205 people found that higher levels of pyridoxal-5’-phosphate (PLP), the active form of vitamin B-6, were linked to lower levels of C-reactive protein (CRP), a marker of inflammation, as well as lower levels of 8-hydroxy-2’-deoxyguanosine (8-OHdG), a marker for oxidative stress, both of which are related to heart disease risk.

CRP is produced in the liver and is a known indicator of inflammation. Increased levels of CRP are a good predictor for the onset of both type 2 diabetes and cardiovascular disease.

Researchers from the Jean Mayer USDA Human Nutrition Research Center on Aging at Tufts University reported their findings in the American Journal of Clinical Nutrition. “Our data suggest that vitamin B-6 may influence cardiovascular disease risk through mechanisms other than [reduction of the amino acid] homocysteine and support the notion that nutritional status may influence the health disparities present in this population,” wrote the researchers, led by Jian Shen.

Shen and co-workers measured levels of PLP, CRP and 8-OHdG in 1,205 Puerto Rican adults aged between 45 and 75 living in Massachusetts. Results showed a strong dose-dependent relationship between PLP levels and CRP levels, with the highest PLP levels associated with CRP levels almost 50% lower than low PLP levels. Furthermore, the highest average levels of PLP were associated with 8-OHdG concentrations of 108 nanograms per milligram, compared to 124 ng/mg for low PLP levels. The associations were observed even after the researchers took into account homocysteine levels.

I like writing, reading and expressing my opinions. I prefer natural health and healing to pharmaceutical drugs. Jesus Christ is my Lord and Saviour.
View all posts by JustMEinT Musings →
This entry was posted in B6, Heart Disease, Vitamins and tagged Vitamin B6; Heart Disease. Bookmark the permalink.