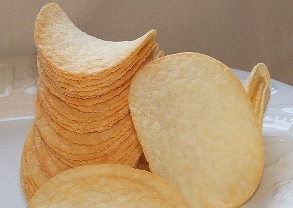 Synthetic fat substitutes used in low-calorie potato chips and other foods, such as olestra, could backfire and contribute to weight gain and obesity, according to a study published by the American Psychological Association.

The study, by researchers at Purdue University, challenges the conventional wisdom that foods made with fat substitutes help with weight loss.

By feeding rats Pringles potato chips – either full-fat or both full-fat and ‘low-fat’ olestra varieties – researchers noted that rats eating both kinds of chip gained more weight. “Our research showed that fat substitutes can interfere with the body’s ability to regulate food intake, which can lead to inefficient use of calories and weight gain,” said Susan E. Swithers, PhD, the lead researcher and a Purdue psychology professor.

The study was published online in the APA journal Behavioral Neuroscience. The study used laboratory rats that were fed either a high-fat or low-fat diet of chow. Half of the rats in each group also were fed standard Pringles potato chips, which are high in fat and calories. The remaining rats in each group were fed high-calorie Pringles chips on some days and low-calorie Pringles Light chips on other days. The Pringles Light chips are made with olestra, a synthetic fat substitute that has zero calories and passes through the body undigested.

For rats on the high-fat diet, the group that ate both types of potato chips consumed more food, gained more weight and developed more fatty tissue than the rats that ate only the high-calorie chips. The fat rats also didn’t lose the extra weight even after the potato chips were removed from their diet. “Based on this data, a diet that is low in fat and calories might be a better strategy for weight loss than using fat substitutes,” Swithers said. However, she warned that it can be difficult to extrapolate laboratory findings about rats to people, even though their biological responses to food are similar. The study was conducted by Swithers along with Purdue psychology professor Terry L. Davidson, PhD, and former Purdue undergraduate student Sean Ogden.

Why would a fat substitute confuse the body? Food with a sweet or fatty taste usually indicates a large number of calories, and the taste triggers various responses by the body, including salivation, hormonal secretions and metabolic reactions. Fat substitutes can interfere with that relationship when the body expects to receive a large burst of calories but is fooled by a fat substitute. There is some good news if a diet is naturally low in fat. The rats that were fed a low-fat diet didn’t experience significant weight gain from either type of potato chips.

The use of artificial sweeteners and fat substitutes has increased dramatically over the past 30 years, mirroring the increase in obesity in America. Dieters have turned to these artificial means to lower calories while still eating foods that taste sweet or fatty. So what is a dieter supposed to do to drop a size? “Unfortunately, there is no silver bullet,” Swithers said. “Eating food which is naturally low in fat and calories may be a better route than relying on fat substitutes or artificial sweeteners.”

I like writing, reading and expressing my opinions. I prefer natural health and healing to pharmaceutical drugs. Jesus Christ is my Lord and Saviour.
View all posts by JustMEinT Musings →
This entry was posted in Healthy Food, Industry Shenanigans, OBESITY, OIL's, Processed Foods, Unhealthy Food and tagged Fat substitutes; weight gain;olestra. Bookmark the permalink.